We hired a driver for the day ($50cdn approx.) which would include our transfer to Tuban (south Kuta)where our hotel was that night. Our first stop was the Monkey Forest Temple. It was a beautiful setting and amazing to see such large trees and streams so close to the bustling roads of Ubud. The paved path led you through some beautiful scenery past sacred trees and moss covered staircases and the two large temples. The roots of the trees reached far down to the stream below. Of course the first thing you see are the monkeys and the hawkers trying to get you to buy food to give to the monkeys. They are the mischievous macaque monkeys and being tourist wise, they will take anything from cameras to water bottles if you aren't careful. After watching the aggression when tourists had food in their hand, we knew we had no interest in feeding the monkeys. The forest covers approximately 27 acres and is the sacred and protected home of about 605 monkeys. An adult male can weigh as much as 10 kg. It was fun to watch the antics especially of the little ones as they hugged their mom’s and pulled their dad's tails and wrestled with other baby macaques. We donned the required sarongs and waist bands so that we could visit the inside of the temple which although built in the mid-4th century is still used for occasions today I believe. Because Daniel had been bitten by an overzealous little monkey in Thailand 4 years ago, we were extra cautious. As we were walking along the path, all of a sudden a monkey jumped on Daniel's back. I was so proud of him as he didn't panic or react in a negative way as the monkeys are protected and considered sacred. He just had this goofy smile on his face that said, “I can't believe this is happening." It was really funny, especially when the monkey had no intention of getting down off his shoulder so he just started walking around with it and people would just stare. Eventually, the monkey climbed down his body upside down stopping at each pocket to check if he had anything of interest. 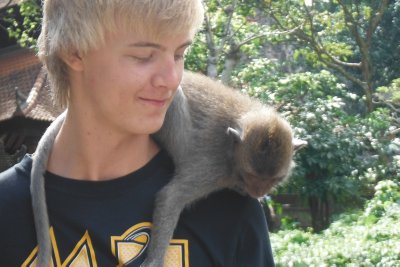 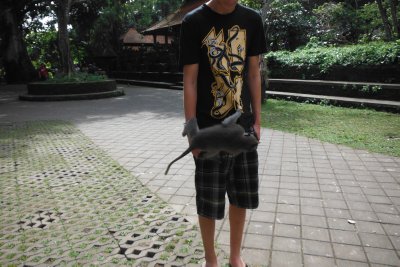 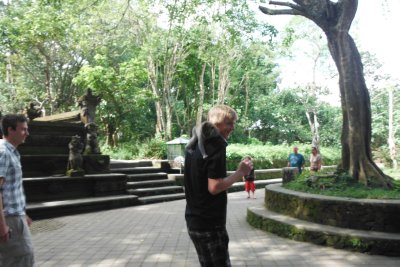 Our next stop was Goa Gajah or for those that only speak English, Elephant Cave. On the way there, Mark mentioned to our driver that we needed to stop at an ATM. When we pulled into the parking lot Mark realized that we still hadn’t found an ATM so he embarrassingly said to the driver that we really needed to go back to get some money. The driver quickly reached into his wallet and handed Mark what was equivalent to $50 and basically said don’t worry, here is some money. It is not often that your taxi driver lends you $5o bucks . He was such a nice guy and we felt especially badly when we remembered that we had gone so far in our precautions with him to have taken a photo of his license plate number and van because we were nervous about leaving our backpacks in his cab. We had nothing to worry about!
Elephant cave again carried us down a set of stairs into an area where the forest grew deep into a creek valley and the trees were huge. We hired a guide for about $10 Canadian to walk us around the grounds and explain the history to us. The first thing we did was go into the pools where originally people were expected to bathe before entering the temple. There was one for the men, one for the women, and one for the Holy Priests. 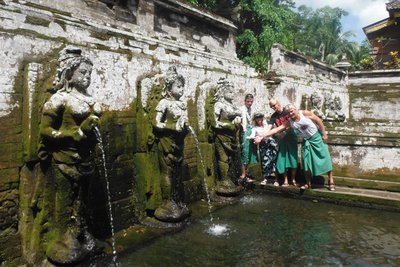 Wearing the required sarongs we were allowed to enter the cave which had a large scary face built all around the mouth which looked like it would scare off even the most holy of the holy.
Inside there were offerings and resting places and we were told the temple cave was still used on occasion. 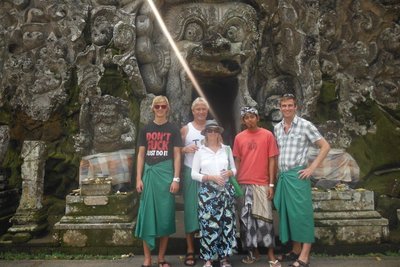 From there we moved deeper into the area where we came upon the original Buddhist Temple as Elephant cave was built for the Hindu people. There had been an earthquake in 1917 which had destroyed the temple but the large boulders at the bottom still carried the original carvings. 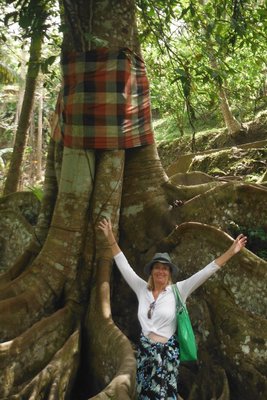 After Elephant cave, we were driven to (yes the ATM) and then the Royal Palace. Here they were preparing for the cremation of some very important person and there were signs all over town about it. They were building a stairway to heaven and painting giant masks and preparing a sarcophagus. Everyone was dressed in Bali traditional costume as they worked and a crowd had gathered around to watch the construction. 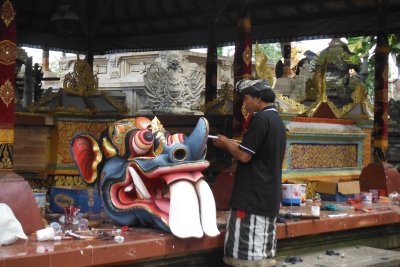 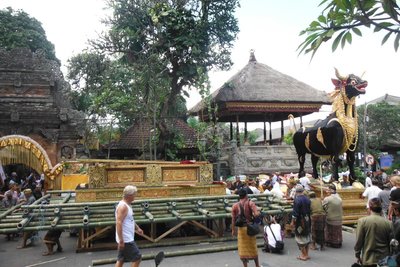 
Our next stop was the market which sold everything including wood carvings, batik, silver, watches and sunglasses. It was all squished into a very tight area and was very crowded but we had a lot of fun trying to barter there. Lunch was at the “Dirty Duck” which was a very large restaurant divided by various gazebos, some of which you could sit at low tables with cushions while others were regular tables. Between the gazebos were beautiful gardens and fountains with ponds and just beyond those were the rice paddies. We discovered the general store next door so bought the wedding outfit I would need when I got back to Canada in a few days.
We left Ubud late in the afternoon and our driver took us south and west towards Tuban(south Kuta) where we would be staying on our final night in Bali. On the way we passed many small villages which each seemed to have their own form of artistry. Some were stone carvers; others wood carvers and others worked in metal, batik or silver. Each village had at least one temple on the street and some had another one directly across the street. Villagers were busy working with thatch roofing material or were carrying various goods in their assortment of weaved baskets. As usual, there were motorcycles everywhere darting in and out of the traffic and making our poor driver very nervous. As we came further south towards the seaside, signs about surfing and references to Hawaii could be seen along the roadsides.
We arrived back at our little guest house where a young family allowed us to take pictures with them in their traditional Balinese dress. We dined at the guest house and went to bed early as tomorrow we would be travelling to Singapore and Hong Kong.

Previous Next Table of contents